The above phrase is part of the Dutch National hymne, and means that there's German blood running through our veins.

The Blom family must be a very interesting family, as already several publications have been done about the Blom family. Mr. S. Oosterhaven wrote about the roofers and plumbers family from Doetinchem and Mr. Rijsdorp even added a part of the pedigree to his publication. Both publications concerned mainly the plumbers and roofers branch of the family. A part of the history has been taken from both publications. But there is a lot more than the plumbers and roofers branch of course. At this moment the genealogy already consist of more than 650 persons. Anthon Blum from Kleef (Germany) probably never expected to have so much descendants, and they are all shown on the world wide web!

The first indication of our family name concerns the baptism of Nicolaus Wilhelm Blum in the reformational church in Kleef (Germany), son Anthon Blum and Johanna Catharina Valens. Anthon was a doctor and was born somewhere at the end of 1600. His son Nicolaus Wilhelmus marries a Dutch little girl and establishes itself in Gorinchem (Holland), he is a doctor aswell. In Gorinchem he has at least 3 children, 2 sons become a doctor aswell. His son Anthoni was probably the first one to use a family arms. 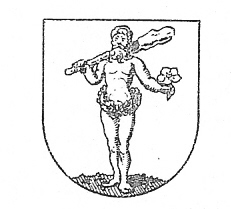 Family arms: in silver a savage man in natural colours, knods on his right shoulder, and a red rose in his left hand.

We know about the other son of Nicolaus Wilhelm, Johannes Stephanus that some of his 11 children got very good professions. The oldest zoon Nicolaas Wilhelmus even becomes the mayor of Gorinchem in 1817, he was also using the above family arms. Two of his other sons became owner of a pharmacy and captain of the infantry. Many descendants have found their work within the judiciary, such as lawyer or solicitor. Other descendants have fond their way in the infantry, frequently in high ranks. In this part of the family we find some interesting marriages, one even with nobility. Nicolaas Wilhelmus married maid Gustava Willemine Henriette van Vierssen Trip, daughter of Mr. Hector Livius van Vierssen Trip and Anna Judith baroness of Imhoff (Assen). It is nice to know, that this part of the genealogy has been incorporated in the so-called "blauwe boekje" (blue book), or "Het Nederlandse Patriciaat" A book of Dutch (semi) nobility. In this book, which has been published since 1910 regularly, exclusively families are mentioned which have played a prominent role in the Dutch society during a minimum of 150 years (or 6 generations). It makes you wander, was the Blom family a rich family? Well, the mayor of Gorichem wasn't poor at all and we know exactly what one of his grandchildren owned, you can read about his inheritance overhere.

Another part of the family, possibly less important, also moves from Kleef to the Netherlands. It is Johann Hendrick Gerardus Blumm. He marries a girl from Zutphen and lives in this city for a few years. Somewhere in 1780 Johan Hendrick Gerardus Blumm establishes himselve in Doetinchem (Holland) and a translation of his name to Hendrik Blom was made. One did not really care how one's name was spelled, most people could hardly read at that time. The registry of births, deaths and marriages became just in 1811 an official government task, before that time most registrations occur mainly in the church registers. Thus the name of his woman is written in all registers in several manners. Geeske, Geesken, Tillig, Tillich, Tillick, Tilligh and even Tulligh. Hendrik proclamed at the baptism of his son Barent his own name as: Johan Gerard Blom, a good reference to its own baptise names.

Hendrik is a plumber of profession and roofer and is welknown in a short period of time. His company is located in the mainstreet of Doetinchem, "de Hamburgerstraat". According to the book "Hamburgerstraat zakelijk bekeken" of A.K. Kisman it must have been one of the oldest established companies in this street. Many churches and important buildings in the area have been provided with slate by plumber Blom. For example of the Catharinechurch in Doetinchem and the church of Zelhem and a casttle in the neighbourhood. These roofs are provide with a piece of lead at the edge of it, a sign that the firm Blom & son has managed the work properly. As from 1806 he is officially registered as plumber at the municipality Doetinchem, the certificate of this can be seen at the personal web page of Hendrik. At the start Hendrik did his work for only fl.0,90 (= about $ 0,45) a day, but a few years later a professional like Hendrik could ask more for the services provided. Some sons of Hendrik also qualify themselves in the profession of plumber, after Hendrik even four generations of plumbers would serve in Doetinchem. Even up to august 1985 a shop in de Hamburgerstraat is owned by a Blom. This house/shop was bought in 1823, for the amount of fl. 500, =. Last century the Blom family started to conserve vegetables in cans. This all started in the kitchen on the Hamburgerstraat but this appeared rapidly too small. So they build a large factory at the Wijnbergseweg in Doetinchem, "Conserven Blom", which was expanding from 1904 with a larger growing production. In their best years a production of 160,000 tin cans with beans were even realized! There is much to be found concerning this factory and there are nice photographs available on the link: Conserven Blom. In 1970, the factory was taken over by the Hak company, a well-known factory of conserved vegetables.

It seems that the family history of the Blom family is one big success, unfortunately that is not a right statement. In the genealogy we find two times shops who were broken, and in the Regional Archives of Arnhem an impressive sentence file is found concerning Michiel Blom, son of previous mentioned Hendrik, who has misbehaved himself shameful. An extract of this file (in Dutch) is found overhere.

The family Blom is a busy family. The oldest son of Hendrik, Barent is still registrated as a plumber, but his son Johannes Bernardes becomes farmer and also hereafter some generations. In our pedigree we can find a pair of regionally well-known architects, an assignee, an artist, an engineer office, an owner of a nutsshop and a bar owner. Still several art work of the artist Leen Blom can be admired in the streets of The Hague. You see some work on its personal page. In the same part of the family, Hendrik Gerhard (Henri) Blom, son of Johan, started his own shop in Varsseveld. Henri produces some postcards and he has a trade in colonial product, such as tea, coffee, spices and spend. On young age Henri dies, his son Hendrik Gerhard Elias starts Insuranceoffice Blom in April 1932. Three generations later this office is still "open for business" in Amersfoort. This office is managed by (again) Hendrik Gerhard Elias. The name "Hendrik" is continuesly found in our pedigree.

Several family members have taken the step to migration. Early 1900 a part of the Blom family could be found Batavia, Dutch Indie. In the middle of the previous century more and more family members make the jump and start a new life in Germany, Canada, New Zealand, South Africa, Namibia or Australia.

Still many of the Blom family nevertheless stayed in Holland. According to the image below there have been 6259 telephone connections with the name Blom in 1993. It's a good thing that they are not all related to our family.... 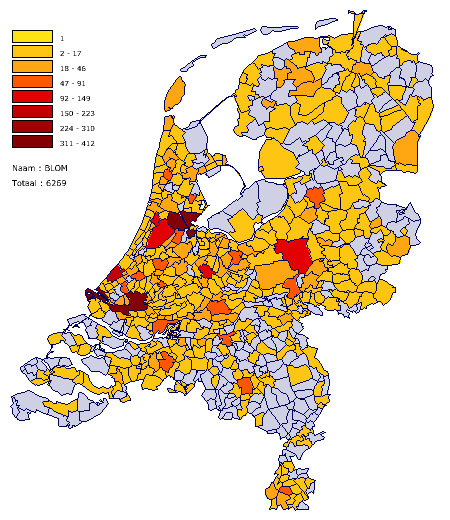 During a count in 1947, there are 9593 persons who have the name Blom in the Netherlands, these can be divided as follows:

Number of Bloms at the count of 1947, with between brackets the number of family members of our pedigree.

There are lot of people carrying the name Blom in Amsterdam. In June 2005 thirty family members have been found who lived in Amsterdam. One family even got 13 children in just 16 years time, this way the number of Bloms is expending rapidly.........

Gelderland is well represented with the family name Blom. In the files of Doetinchem, a pretty large city, you can find a period of time that all Bloms were related! In October 2007 totally 617 persons had been incorporated in the family genealogy, all these people are born with the name Blom or have married with a male Blom. Among these 617 persons there are nowadays still about 248 alive. The geographical partitioning of our genealogy is as follows:

Amsterdam is represented therefore with about 17% of all the Blom family. Doetinchem has been also well represented with 14%, especially in the early years of our pedigree. At the moment there are relatively many Blommen living in The Hague and abroad.

But where does the name Blom originate from? Most will have guessed the link with the Dutch word "Bloem", which means flower, but it could be possible that the first man who adopted the name Blom was a gardener or someone "with a good character". There also is a Germanic maiden name Bloma and a third possibility indicates "blomme" which means flour and then we can think about a miller or a baker.

Is Blom a typical Dutch name? Perhaps, but more people listening to the name Blom live in Sweden. Of every 1.000.000 inhabitants (according to the telephonebooks) the following number of people are named Blom:

According to these telephonebooks most Blom people live in Amsterdam and Oslo.